In this post, we will explain some basic ideas regarding how Comprimato saves infrastructure costs on image processing workflows. We will then discuss how platform versatility and a hardware agnostic approach reduces the price of IT infrastructure and last but not least, we will present you with several points to consider regarding software-only platforms as the future-proof solutions of tomorrow.

Every customer has its needs but, unfortunately, they are usually not the same. In the broadcast industry, for instance, essential infrastructure and basic workflows were established a long time ago, and even though we often hear about IP migration and OTT (Over-the-top) video delivery, they will not be changed in the short-term future. So, it is clear that savings on infrastructure come with the ability to fit various ecosystems.
Typically, changes in hardware or even a minor setup change in today’s workflows mean a big infrastructure investment. Consider the software approach however: Our UltraJ2K SDK can seamlessly run on a large number of platforms. From NVIDIA JETSON, over standard desktop CPUs & GPUs up to professional server CPUs and professional GPUs. It works with both Intel and AMD CPUs. The same is true for GPUs, where we support both CUDA on NVIDIA and OpenCL on AMD GPUs. The ability to run on any COTS (commercial off-the-shelf) hardware will play a key role in designing the new cost-effective workflows of the future.
You can check the performance of COTS hardware in our online tool.
Despite this, compatible hardware doesn’t automatically mean smooth operation. The Operating system (OS) is another part of a puzzle which has to fit to the entire ecosystem. Comprimato provides compatibility across the various OSes: (Linux, Windows, and MAC) to fit the diverse needs of different clients.

No need for dedicated hardware

Have you ever tried to process 8K video on dedicated hardware? Yes, it is possible but is it worth it? There are several hardware solutions on the market which are capable of handling 8K video but only @ 30FPS. Special hardware usually costs tens of thousands of dollars and supports only video up to 4K@30FPS. This should be enough for a year or two, but not in the long run. This means that there will have to be more investment in the near future, possibly as soon as two years.
Dedicated hardware and boxes have specific parameters which aren’t always scalable. They cannot edit at higher resolutions than those for which they were built. These limits can either get you stuck at some point or will require regular updates which cost money. On the other hand, our software is leveraging standard hardware commonly available at electronic stores.
All Comprimato products are hardware agnostic so they can run on any hardware. This gives content providers the flexibility to quickly react and adapt to changes on the market. For instance, moving from 4K@30FPS to 8K@30FPS has no limitations other than the need for more performance which can be easily achieved by adding extra GPUs to the server.

Speaking of density, we should mention our flagship product, Live transcoder. This software-only transcoder is a cost-effective solution for live video workflows such as in traditional broadcasting or OTT. The Live transcoder, whether it is running virtualized on a standard on-premise server or in the cloud provides up to 64 input streams in 1 RU (rack unit) while competition typically needs 16 RU.
Here are some key Live transcoder benefits:

Away from initial investment to hardware. Consumption, cooling, and maintenance of 1 RU cost around 1500$ per year. In summary, our software is capable to save thousands of dollars every year. And its impact increases with multi-platform delivery. For instance, our ABR transcoding setup usually creates 8 outputs for HLS distribution on every input. After some basic calculations, 100 input streams for OTT distribution will require 800 output streams. That is a lot!
Follow the numbers above, it is clear that density matters when running tens or hundreds of streams simultaneously.

Here are two example situations with 1 RU server which supports up to 4 GPUs:

On the other hand, if you prefer higher density, there are plenty of solutions. One of the most powerful offers is thinkmate.com.
Example 2 for up to 56 input 1080p60 streams

As you can see in the tables above, the COTS hardware setup can reflect individual production needs and may differ in regard to the required performance and density. High-density setups usually require higher initial investment as you can see in table two, but it is cost-effective in the long-term perspective and, additionally, leaves space for production peaks.
Furthermore, there is another benefit coming from using our multifunctional software platform. It is called extremely low latency. Comprimato software merges the functionality of expensive hardware boxes into one software solution. The compatibility with high-bitrate contribution formats like JPEG2000 or even raw formats using the SMPTE 2110 standard allows for the removal of the contribution receiver. Direct data transmission between the point of creation and Comprimato software simplifies the workflow and reduces end-to-end latency as low as 500ms.

Software is a scalable, future-proof concept

It is clear that software virtualization is slowly but surely changing the game even in traditional industries such as broadcasting. The software approach brings a new era of products which are way more flexible, scalable and cost-effective than legacy hardware solutions. And it is now being more and more commonly adopted.
The world is changing faster than ever before. New technologies are developed every day. With regard to the media and entertainment industries, there are constantly dramatic improvements in resolution, video quality, and formats. We are moving from reserved links to public IP utilization. UHD, HDR, VR and artificial intelligence, all technologies which are still waiting to get to the masses.
Unfortunately, hardware solutions are by far not agile and flexible enough to react to these changes. Fortunately, software is. Any new technology can be added as a patch in a matter of days while current workflows can stay unchanged. This is, from our point of view, the crucial feature of software platforms.
Software, if it has not already done so, should change your thinking about how the future will be formed. 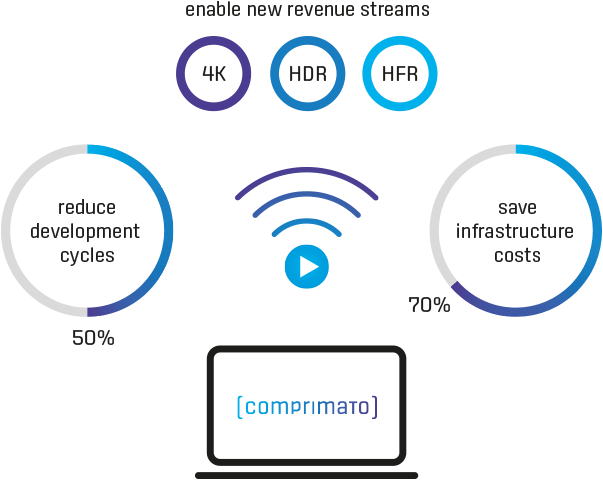 Comprimato software provides a perfectly flexible, scalable, and cost-effective solution which meets the requirements of live video processing and new media delivery. It is capable of reducing infrastructure costs by up to 70 % and gives you the possibility to immediately react to market or production changes.
Unlike dedicated hardware, running on commonly available hardware (COTS) ensures a still widely open ecosystem and relatively cheap future upgrades. Easy deployment to production facility or to the cloud gives content providers the ability to choose the most suitable solutions for specific use cases.

Comprimato provides a free 14-day fully functional trial for testing in the form of a downloadable installation or bootable image file.

For more information about the trial, please contact us.