This is the first part of five-part series on JPEG2000 compression standard. In this series we explain various advantages and features of JPEG2000 in rather popular form than trying to be yet another technical description of the JPEG2000 ISO/IEC 15444-1:2004 standard. We will, however, link technical specification and more detailed sources.

JPEG2000[1] is an image compression standard aimed at providing compression performance superior to the well known JPEG[2] standard. The difference other video and image standards is also that JPEG2000 provides advanced capabilities demanded by applications in the fields such as medical imaging, film industry, or geospatial imagery.

JPEG2000 was standardized in year 2000 by the Joint Photographic Experts Group (JPEG)[3] as the successor to the original JPEG format. One of the key changes is that, while JPEG uses DCT[4], JPEG2000 is based on top of discrete waveform transform – DWT[5]. JPEG2000 also allows for mathematically lossless, visually lossless, and lossy compression mechanisms. Another great feature is for example resolution scalability which will be very important for Ultra HD 8K and Virtual Reality video.

The 5 episodes of this series will explain the features, benefits and applications of JPEG2000. This first episode is going to cover the benefits of JPEG2000. We’ve picked 8 of the very useful ones which we will introduce to and explain their utility.

One of the main advancements of JPEG2000 is its compression performance and therefore enhanced image quality. The compression method used in JPEG2000 is a variation of binary arithmetic coding[6] called Embedded Block Coding with Optimal Truncation (EBCOT)[7]. While JPEG or video compressions like Apple ProRes or Avid DNxHD allows only for a lossy compression[8], JPEG2000 provides three compression schemes:

It is important to note that, strictly speaking, there are only 2 compression schemes in JPEG2000. In reality the visually lossless is just a very light lossy compression.

Let’s talk about the practical differences between these compression schemes.

By using Lossy compression it is possible to reduce the size of a given file up to 100x, or even more. A trained eye can, however,  perceive the quality difference and the difference is becoming very visible at extreme compression ratios. Such compression settings are most frequently used to save data and bandwidth on the internet.

In contrast to many image and video compression standards, JPEG2000 is based on the discrete wavelet transformation (DWT)[5]. JPEG, Apple ProRes, Avid DNxHD, or AVC  are using so called discrete cosine transform (DCT)[4] which introduces the well known block artifacts.
The source of the blockiness is coming from the fact that DCT splits the image into 8×8 small blocks. This creates the visually perceivable imperfections in the image. On the other hand the DWT of JPEG2000 is transforming the image as whole so there are no blocks. The result is that JPEG2000 can compress better and keep higher quality images.

The difference between JPEG2000 (left) and JPEG (right). JPEG2000 image is clean while JPEG image features compression artifacts. The compressed size of the images is the same.

3) One file multiple resolutions with JPEG2000

JPEG2000 allows to display an image or video in different resolutions. For example user can decided that UHD 8K video will be played in HD resolution. The video is a single file and there no additional data stored. It is called resolution scalability. The resolution scalability of JPEG2000 is closely related to the DWT transformation and the EBCOT compression method.

It is very useful when editing high resolution films. The film is then edited in lower resolution and when done the editor can render the movie in the original resolution. This saves network bandwidth and enables Ultra HD 4K/8K video editing. Same feature is often used in cinemas where a movie is screened in only 2K, but the film itself was delivered in 4K.

The lower resolution image can be useful if you wish to display only the image preview.

JPEG2000 also supports dynamic quality allocation. When contributing a video channel over an IP network, it can automatically adjust the amount of data which is currently being sent based on the amount of available bandwidth at the given moment.

Moreover the video quality and the resolution can be adjusted during the IP transmission pushing the software-defined networks and broadcast IP production to the next level.
As a result, JPEG2000 is able to achieve the highest possible quality for the given IP link.

5) Adjusting picture to your screen

With JPEG2000 an image can be adjusted to the particular screen. The resolution of the image will be appropriate when displaying it on a smartphone, tablet, or on a desktop screen. This saves storage, image transcoding, internet bandwidth, and the image can be loaded faster.

JPEG2000 makes editing easier. Thanks to an intra-frame compression, which is carried out on every image or frame separately, it is possible to obtain a single frame from a video or image during the process of decoding and edit it accordingly. Therefore, it is not necessary to decode the whole group of images, as it is the case of inter-frame compression where only a key frame is compressed and the rest of the frames is compared to this key frame.
Another feature of JPEG2000 is low latency which results from intra-frame compression. Working with such format is therefore very fast.

Thanks to the resolution scalability is possible to edit and process UHD 8K or 360° video using current HW equipment.

7) Encoding and decoding without quality degradation

JPEG2000 ensures stable quality regardless of the number of times the original image has been encoded or decoded. The image keeps the stable quality as opposed to the other image and video formats, where the quality is degrading quickly during the coding process.
Another interesting feature is the Region of interest (ROI) which enables the user to choose and mark an important part of an image, which retains the highest possible quality. The quality is lower for the rest of the image. 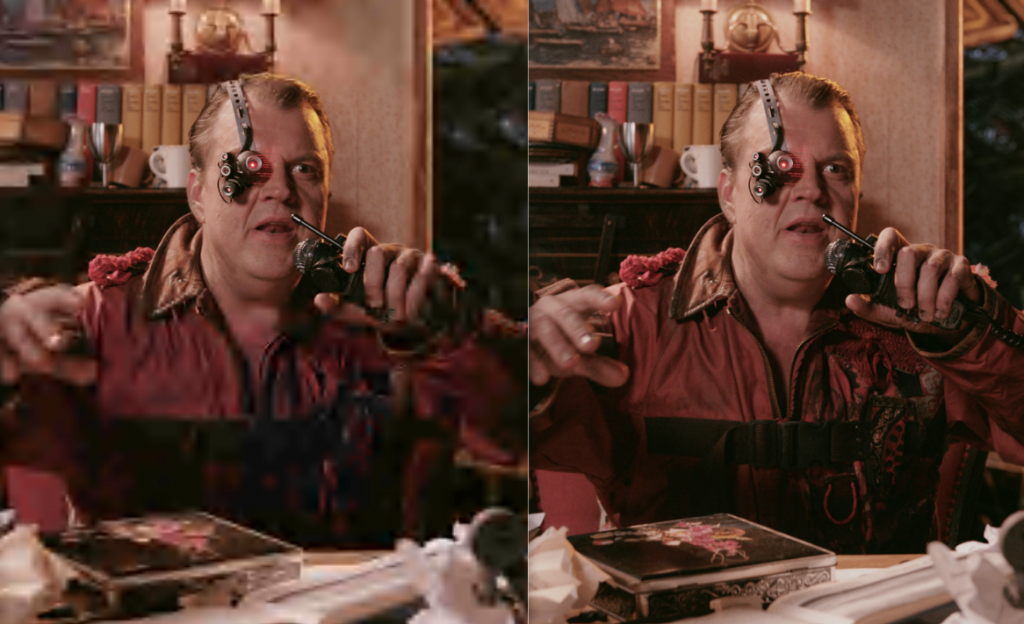 A comparison of images with the usage of Region of interest (left) and without (right). This is a bit artificial example but it can be seen that the image on the left is of lower quality except the area around the actors head. A better example would probably be a microscopy image data where only central part of the image carries useful information.

One of the big benefits of JPEG2000 is its universality. It is able to work with:

Moreover, as opposed to formats like ProRes, H.264, HEVC, AVC-I or others JPEG2000 is open ISO standard[1] which is free of any patent and royalty fees. Even though JPEG2000 is protected by patents, the patent holders agreed to make it free.